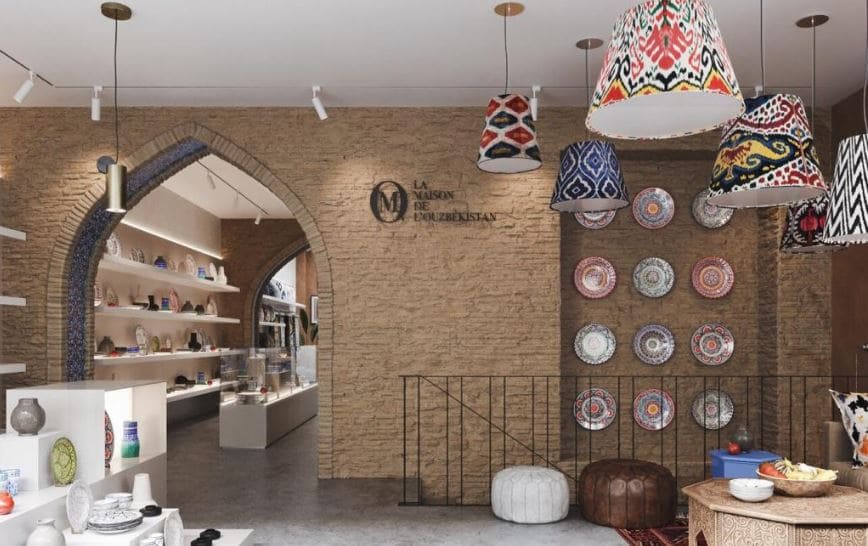 Though Lola Karimova Tillyaeva as been based between Europe and North America for many years, she still feels an enduring connection to her homeland. One of her passions is promoting Uzbekistan´s rich and diverse cultural heritage globally. Several years ago she co-produced a feature film with her husband, businessman Timur Tillyaev. Though the movie is an entertaining piece of cinema in its own right, the film was also produced to bring attention to the life and legacy of Ulugh Beg, one of Uzbekistan’s most celebrated heroes. Lola also organised a fashion show titled: “Fashion in Uzbekistan:Yesterday and Today,” which showcased the evolution of the country´s thriving fashion scene.

Most recently, Lola has founded La Maison de l’Ouzbékistan. Located in downtown Paris, the gallery hosts a gorgeous selection of hand-made homewares, finely crafted silks, fine timber furniture and unique ceramic pieces. Her team at La Maison work hard to display each piece in its correct cultural context, giving give visitors to the gallery a deeper understanding of Uzbek culture. Staff from Galeria Joseph who visited the gallery said:

“Just push the door of “La Maison de l’Ouzbékistan” in the heart of the French capital to be transported to a fascinating country. An open window to this country’s rich culture and artisanal ways, the Central Asian gem offers a total change of scenery through the objects and books it offers.”

Having previously served as Uzbekistan’s Permanenent Representative to UNESCO, Lola Karimova Tillyaeva has experienced first hand how Uzbek culture stunned first time visitors. She envisages La Maison to act as “a cultural bridge between Europe and Central Asia, providing a singular portal to Uzbekistan right in the heart of Paris – a means of introducing Uzbekistan’s rich cultural heritage to a European audience.”

Lola´s commitment to Uzbekistan does not stop there. She is also engaged in philanthropic work – for which she was made a Dame of the Royal Order of Francis I in 2018.

The flagship of Lola and Timur´s charitable operations in Uzbekistan is the NGO, You Are Not Alone. The NGO aims to help underprivileged children in Uzbekistan. Since 2002, Lola and Timur’s foundation has been funding upgrades for orphanages and care homes across the country. They have also set up The Educational Centre which specifically targets kids at risk of dropping out of school. By employing specially qualified educators and tailoring the syllabus to the needs of each student, the centre has helped keep more children in school and reduced the rate of dropouts. A significant number of students in the program also go onto higher education. You Are Not Alone also offers programs and scholarships to these students to support them in the later stages of their education.

Thus, while La Maison de l’Ouzbékistan promotes Uzbekistan’s history and culture, Lola and Timur’s charitable work is helping to ensure the children of the country have a brighter future.

← Timur Tillyaev makes ESG the focus of his business practices
The Droplet: a project by Lola Tillyaeva to raise awareness about water scarcity →