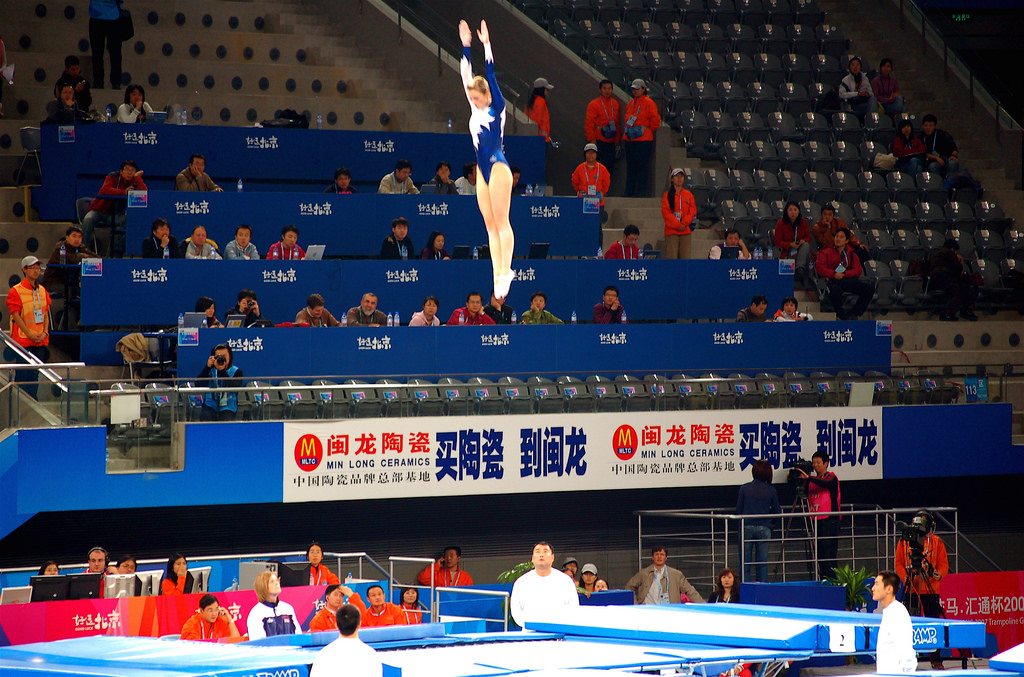 For nearly 10 years, the National School of Advanced Gymnastics in Uzbekistan has worked to develop the country’s most promising young gymnasts into Olympic-caliber athletes. Student gymnasts are selected through regional competitions. While attending the school, they receive support from a broad range of sports-related professionals, including psychologists, nutritionists, and physiotherapists. They also obtain intensive coaching and training.

One of the many types of gymnastics that these young athletes train for is the trampoline. While it is relatively new to the Olympics—trampoline made its debut as an Olympic event at the 2000 Summer Games in Sydney—it has quickly become one of the most popular gymnastics disciplines for competitors and spectators alike. Read on for a roundup of nine amazing facts about Olympic trampoline.

While the concept of the trampoline has been around for a while—a form of trampoline using stretched seal or walrus skin was historically used by Inuit people to toss hunters into the air so they could get a better view of nearby game—credit for the modern trampoline goes to inventor and gymnast George Nissen. The idea for the trampoline came to Nissen in 1930 while he was watching a trapeze performance at a traveling circus: he was so inspired by the tricks that dismounting trapeze artists performed as they rebounded from the safety nets stretched below that he wondered if it would be possible to invent a contraption that would make it possible to keep on bouncing and flipping.

Olympic and World Championship trampoline competitions involve two trampolines placed 2 meters apart from each other and just 10 meters away from the judging panel. According to regulations, the bed of each trampoline is woven from nylon strips less than 6 millimeters in thickness, and it is attached to a frame with more than 100 steel springs.

If you have a fear of heights, then life as a trampoline competitor is probably not for you: it’s common for trampoline athletes to bounce as high as 33 feet in the air (about the length of a typical school bus).

If you want to appreciate the finer details of competitive trampoline, it’s a good idea to learn some of the lingo. The three basic positions that you’ll see most often in routines are known as tucked, piked, and straight, but there’s a great deal of variety beyond that. Special moves and skills include the Barani (a front somersault featuring a half-twist), the Cody (a backward somersault from a front landing position), and the Quadriffis (any form of quadruple somersault from a front landing position).

Athletes are allowed to make contact with the trampoline bed in one of four landing positions: feet, front, back, or seat. According to Olympic competition guidelines, each routine must include a combination of 10 contacts.

During the Olympic trampoline event, competitors are watched by 11 judges who award scores for a range of detailed criteria, including height, technique, execution, body control, and continuous rhythm. Every detail of the routine, from the foot position to the angle of the limbs, must be as close to perfect as possible. Competitors can lose points for a variety of reasons, such as not beginning or ending their routine on their feet, taking too long to start a routine, or landing on the frame of the trampoline.

Inventor George Nissen dedicated his life to developing and promoting the trampoline, so what a moment it must have been for him, at the age of 86, to attend the first-ever Olympic trampoline event at the 2000 Summer Games in Sydney. (Best of all, he was actually invited to bounce on the official trampoline.)